You are here: Home / News from Brentknoll Vets / De-worming… Let’s See you Worm Your Way Out of That One

We’re not talking about worms found in your garden flowerbeds, parasitic worms come in a variety of shapes and sizes. Don’t squirm and let Brentknoll Vets get to grips with worms …. we’ll get a wriggle on.

What types of worm affect dogs?

The most common type of worm affecting our pets is intestinal worms, which as the name suggests live in the pets gastric system. 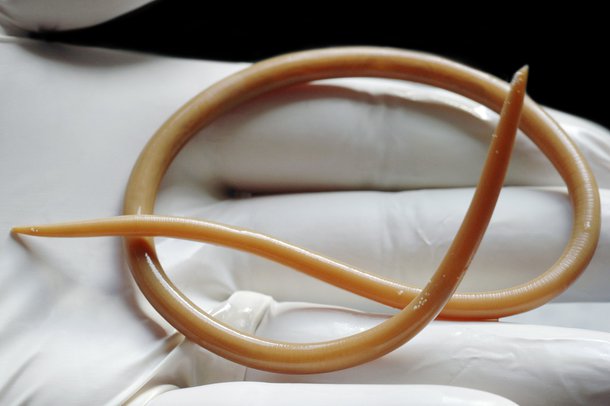 Roundworms: One of the most common intestinal worms affecting both cats and dogs, these parasites look round and resemble lengths of spaghetti. They can vary in size and the largest roundworms can grow up to 18cm in length, they feed on food in the animals bowel and adult worms release hundreds of thousands of eggs a day into the environment, passed in the animals stools.

Tapeworms: As the name suggests, these worms are flatter and shaped more like a piece of tape, they are made up of long segments attached together in a long string. They can grow even longer than roundworms, attaching themselves onto the stomach and intestinal walls with sharp teeth. As they grow, they produce new segments filled with eggs, the segments will eventually break away and are then passed in the animals stools. When passed in the poo, the segments it can look like grains of rice and may even wriggle around like a maggot before they die. If any get caught around the animals bottom, it can be itchy and result in ‘scooting’ behaviour.

Whipworms: Are less common and less talked about. They are much smaller than round or tapeworms, typically measuring only 6mm and living in the large intestines. They shed microscopic eggs in the stools of the animal and are so small they can often be missed even when testing stools.

Hookworms: Another less common worm, they look very much like roundworms but are typically much smaller usually no more than 20mm in length. They feed on blood by attaching themselves onto the animals intestinal lining. They

Lungworm is a parasite carried by slugs and snails; it’s been present in the UK for around 30 years but until fairly recently was mainly confined to certain parts of Cornwall and Wales. It has now spread around the UK and more owners are becoming aware of it. Speak to your vet about treatments and tactics to avoid your dog getting lungworm.

As well as warmer temperatures being thought to be partially to blame for the spread, foxes may be responsible too, as slugs and snails form an important part of their diet and urban populations of foxes are on the increase.

How can my dog get worms?

Roundworms are picked up from the environment by your dog on his muzzle, paws, and coat as he sniffs, licks, and plays on contaminated areas; they are then ingested and thus continue their lifecycle. Even though all traces of the faeces they were passed out in may have disappeared completely, the eggs can remain infective in the grass or soil for two or more years. They can also be passed on indirectly if eaten by a rodent or bird that is then eaten by the dog.

Puppies are especially vulnerable to roundworms, and they can be born already infected with them by their mothers, or the worms can be passed on through her milk or when she licks them, so worming the pregnant bitch as well as the puppies from an early age is important; your vet will be able to advise on this.

Tapeworms are slightly different in that the eggs passed by the adult worms need to be eaten by an intermediate host; in the case of Dipylidium caninum, this is a flea. When a dog then swallows an infected flea, the lifecycle continues. There is also a less common type of tapeworm which lies dormant in the muscles or organs of rodents and rabbits, and which can then infect dogs if they eat these affected animals. What can worms do to your dog? Worms can damage the gut, stunt growth, cause blockages, diarrhoea, dehydration, anaemia and severe weight loss, and make your dog more susceptible to other diseases; in some cases they can even be fatal.

It’s not only your dog who is at risk from worms; humans can be too.

If Toxocara canis eggs are ingested, they won’t develop into adult worms, but will nevertheless become larvae that may travel around the body to the lungs, liver, and sometimes the eyes, where they can cause impaired or even complete loss of vision.

Exercising good hygiene precautions is therefore important, particularly with children, who should be taught not to share food plates with the dog and to wash their hands after petting or playing with him. Provided you also instigate a regular worming routine, and clean up promptly after your dog, any risks should be minimal. If you have children you might also like to fence off a separate ‘clean’ area of the garden where they can play but which your dog is not allowed in.

Signs of worm-related disease include:

Even if there are no obvious signs your dog has worms, don’t wait for symptoms of infection to appear before you do anything about worms — by the time this stage has been reached, he’ll have a heavy infestation and the worms will be doing their damage. A preventative strategy is as important as some form of regularly administered worming treatment; such preventative measures include scooping your dog’s poo, both out on walks and in your garden, to help minimise contamination. Try also to prevent your dog from scavenging, regularly wash his bedding, and keep an eye out for fleas.

How often should I worm my dog?

When a worming treatment is given, although it removes worms already present in the digestive tract, it leaves your dog’s system after a few days, so it won’t prevent re-infection. This is why it’s important to have a year-round programme in place. Frequency of worming depends on the product you use, the age of your dog, and your lifestyle.

These are all points that you can discuss with your vet when working out a worming programme suitable for your particular dog, his environment and the type of product you decide to use.

The most important thing, however, is that the product you choose is effective against the worms you want to target, and this is where it can become confusing; there are a wide variety of treatments available, but they don’t all do the same job. Some are specific to certain types of worm, while others are broad spectrum, dealing with a wider range of parasites that your dog is most likely to encounter; some are effective only against adults, while others will also deal with immature stages. Some may need to be administered on a more frequent basis than others, and these factors may influence your choice depending on which you find easiest to give your dog.

Some wormers are not recommended for certain breeds, and this is when the advice of your vet in helping you select the right product can be helpful. It’s not necessary to visit the surgery and pay for a consultation every time you want to worm your dog however — this is something that you can discuss with him when you first get your dog, and when you visit for your pet’s annual check-up. Once you’ve worked out a programme and decided on the most suitable wormer, you can then buy the product you want either from the practice, a pharmacy, pet shop or online.

Giving my dog a wormer

Step one: Wormer dosage for dogs

Before giving a wormer, make sure you are giving the right dosage for your dog’s weight; As this can fluctuate with both age and activity, check it first. If your dog is too big for you to pick up and hold while standing on the scales, weigh him on the scales at your vet’s instead.

Step two: how to give a wormer

Many wormers come in tablet form these days, and are often flavoured so it can be easy to persuade your dog to take these, seeming more like tasty treats than an unpleasant medicine. Alternatively you can conceal them inside a piece of cheese or sausage, or coat them with a dab of peanut butter or cream cheese. Give him something with no tablet in it first, before offering the ‘doctored’ treat and he’ll be less suspicious, expecting something nice and more likely to quickly gulp it down. If you have a dog who is hard to fool you may have to pop the pill into the back of his mouth yourself — you can also buy a ‘pill popper’ from your vet or pet shop.

Liquids, syrups, and pastes can also be easy to administer directly into the mouth, while granules can be mixed into the food. Do read through the accompanying instructions carefully as some products should be given on an empty stomach, with or without a certain amount of food; some tablets may also need to be given whole rather than broken or crushed.

Make sure your dog has swallowed all the wormer and doesn’t spit it out a couple of seconds later, and if giving it in his food, ensure he eats the whole meal himself — don’t leave any leftovers lying around where other pets may help themselves. Only treat healthy animals — if you are unsure, consult your vet about advisability — and always use wormers that are manufactured specifically for dogs.

Do take special care when around horses and livestock that may have been recently treated for worms, as some of the drugs commonly used can have adverse effects on dogs. There are many accounts of dogs who have become seriously ill after coming into contact with wormers intended for equines and livestock; ingesting even a small amount can be fatal. If you are a horse owner and your dog usually accompanies you to the yard, make sure he doesn’t snack on any of the droppings of recently treated horses either for at least three days after worming.

You may prefer to adopt a natural approach to worming — perhaps because your dog has existing health problems, or simply because you don’t like the idea of using chemicals. There are alternatives to choose from, including giving garlic, neem or one of the many herbal and homeopathic preparations available. Remember that they will not have undergone the same extensive safety and efficacy testing as the products of commercial drug manufacturers, so it may be a good idea to have stool samples checked from time to time; on average this will cost somewhere in the region of £30.